The eradication of polio is one of Rotary’s longest standing and most significant efforts.

Along with our partners, Rotary has helped immunise more than 2.5 billion children against polio in 122 countries. We have reduced polio cases by 99.9 percent worldwide and we won’t stop until we end the disease for good. 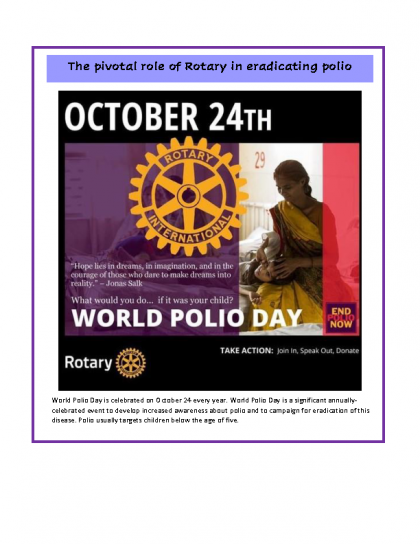 The Pivotal Role of Rotary

Rotary provides grant funding to WHO and UNICEF as part of the Global Polio Eradication Initiative for the following activities:

By the time the world is certified polio-free, Rotary’s contributions to the global polio eradication effort will exceed US$2.2 billion, including US$985 million in matching funds from the Bill and Melinda Gates Foundation. Rotary’s contribution to the Global Polio Eradication Initiative since 1988 accounts for nearly 14% of all contributions through June 2017 and represents approximately 42% of private sector contributions. Rotary is the leading non-governmental voluntary organisation contributor to the GPEI.

To date, 122 countries around the world have benefited from PolioPlus grants. From the launch of the Global Polio Eradication Initiative in 1988, more than 17.4 million people, mainly in the developing world, who would otherwise have been paralysed, are walking because they have been immunised against polio. More than 650,000 paralytic cases of polio are now prevented every year. Since 1988, more than 2.5 billion children have received oral polio vaccine. In 2017, more than 430 million children were vaccinated in 39 countries using almost two billion doses of oral polio vaccine.

We meet at 8pm on a Wednesday evening at Billericay Town Football Club. Occasionally, we meet by Zoom - so check with us here before visiting.